This week, we sat down and interviewed Ricky the Meadmaker and artist Autumn Dufresne about the next in our New Year, New Mead campaign. Here's what we have to say about Bragi.

What are the tasting notes for Bragi?

This is the third selection from our Ancient Collection. How did you come up with the recipe and why does it deserve its place in this collection?

Bragi was the mead that I was most excited to make. You’re playing with so many flavors and there’s so much history to the brew that it was a wonderful challenge to balance historical precedent with our modern brewing techniques.

Meads like Bragi have been made throughout Northern Europe for millennia, and they’re personally one of my favorite strong meads to drink.

How has Bragi changed since its initial brewing?

Bragi has stayed pretty consistent, though we did switch the yeast strain to get it a touch dryer in the second batch.

As we know, Bragi is the name of the Norse god of poetry. Why does it make such a perfect name for mead and why did you choose it?

Bragi is the god of Scaldic poetry (amongst a few other things), a tradition very closely connected to mead. Consider that a word related to his name, bragarfull, is a cup drunk in solemn occasions with the taking of vows, and you can see why Bragi was the first name we thought of for this mead!

Autumn, can you tell us a little about the label design?

Autumn: Bragi was one of the trio of labels and meads that were being developed alongside one another intentionally as a triptych.  Named for the Norse God of poetry, he is often depicted in imagery holding a harp.  One of my earlier sketches even included him playing a harp under a tree, but we decided we wanted to stick with the theme of trees but not include any specific human-form characters in any of the images, and keep the symbolism very loose and broadly accessible to different personal interpretations.

So that is why in the end, the harp alone, leaned against the tree, became the symbolic reference to the namesake but without a representation of the figure himself present.

As with the other Ancient Collection meads, the labels tie into each other, and some of the roots and branches of the central Vanir label slide into the periphery to twine and overlap with the tree upon which the harp leans in the Bragi label.  I added the gnarled juniper tree in the backdrop and the roses in the foreground as a nod to the floral notes and juniper berries in the recipe.  The other design factor was in the style of the musical instrument I chose to depict.

I wanted to be careful not to use the more common style that comes to mind when you envision the word "harp," as there are other breweries that use that iconography as part of their logo, but I also wanted to reference that very established symbol of the Norse God whose name we used, so I modeled it after the Kravik Lyre, which is historically Scandinavian in origin and would still be recognizable, as that instrument is used in a contemporary music group popular with some of the same crowd who gravitate toward Viking aesthetics and default to mead as their beverage of choice.  My hope was to visually resonate with that demographic while also being equally welcoming to anyone at all. 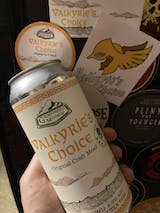 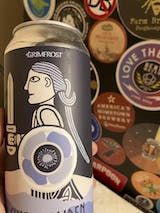